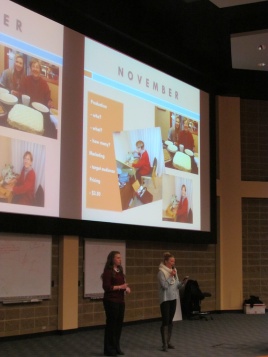 Business School students are taught how to create and manage businesses. They are also increasingly being taught how to create and manage businesses as a force for good. What would happen if they were given one month, and one dollar, to see how much money and how much good they could create? That is what incoming students at the University of Guelph’s College of Business and Economics did last year when they participated in Micro-Tyco.

I recently spoke with Kerry B. Godfrey, the associate Dean at the College of Business and Economics, and Trent Tucker, assistant professor responsible for running the programme at Guelph, about their experiences.

Student teams are given $1 of seed capital and challenged to take their ideas, operate the business and generate as much real wealth as (legally) possible within one month. At the end of the month, the proceeds generated through the various business initiatives were turned over to the WildHearts Group to invest through micro-finance loans given to women in developing countries to develop their own entrepreneurial ventures.

Where did Micro-Tyco come from?
Micro-Tyco is project from WildHearts in Action, a charity based in Scotland. Over the last three years 16,875 Micro-Tycos—from schools and corporations—have taken part in the challenge and raised hundreds of thousands of dollars. We at the University of Guelph are the first North American university to take part.

Why did you decide to participate?
We promote the notion of business as a positive force for change in our program and at our University. The vision of our Business School is about developing ‘Leaders for a Sustainable World,’ which fits directly with the objectives of Micro-Tyco. We got involved in the challenge as we were interested in trying to do something different with our 1st year business students. We wanted to do something impactful, not simply a business survey course, or another ‘dragon’s den.’

For our students it was not just another business plan competition, but more of a live simulation where real money changes hands—all the facets of business are addressed and practised from the get-go, and in a learning environment. Experiential learning is a key priority for us, and Micro-Tyco certainly delivers on that—it is active learning. Our efforts and learning go to helping others sustainably—not through a handout, but through creating opportunity.

What were some of the challenges? Successes?
Scale was the big issue. We had 880 students last term, meaning 176 teams of 5 students. Each team worked on a Micro-Tyco project idea to develop a business plan/pitch, for grades (i.e., Micro-Tyco was “baked into” the assessment for the course). Twenty-two teams were named as “go forward” teams by the teaching assistants. We took a “challenge by choice” philosophy—if students wanted to accept the challenge, they could, but were not required to. We had 10 student teams in the end (and a Faculty Team so we could be seen as leading by example). I think if we unleashed 100+ Micro-Tyco teams on the unsuspecting residents of Guelph it would have been very chaotic; 10 to 15 teams (MAX!) seems to be workable.

Micro-Tyco has one rule: all transactions must be legal. We added a few more rules, such as students had to sign a release and indemnification form (based on the template for off-campus field trips and activities), they had to respect all university policies (e.g., if they wanted to set up a table to sell cupcakes, they had to apply for that just like every other club on campus), and so on. Nothing insurmountable there, but making sure everything ran smoothly.

Turning eleven $1 micro-finance loans into over $8,500 was a good feeling (as was winning the Micro-Tyco “International Category” award!), but the real successes were in the learnings each student team had.

What are some of the interesting projects that have come out of it?
We’ve only run it once thus far, and we had some interesting projects amongst the different teams participating. The first example is a team that used their network and “worked the net.” One student’s father runs a limousine company while another student’s grandparents have a box at the ACC for the Toronto Maple Leafs—instant raffle prize! This team sold tickets at $100 each to win a box for eight people with limo service to and from Guelph to see the Maple Leafs and Boston Bruins duel it out. They came in second place ($1,900 profit). They took the “event” approach, vs. an on-going sustainable business approach.

The team that made rice-filled hot sacks really understood the concept. Their product—small squares of denim from old jeans filled with rice that you pop it into the microwave, heat, and apply it to sore muscles—was also a hot seller (no pun); demand outstripped supply. This team never went into debt. With the demise of the Canadian penny, they knew they could buy $1.02 worth of rice with their micro-loan loonie, so they did. The denim and sewing labour were donated. They sold a few bags and made enough money to buy more rice and so it went on, eventually turning into 354 dollars profit for the hot sacks.

All of the teams had to present their product and findings to the rest of their peers on the last day of classes. I think that was the pedagogical achievement of this whole exercise—sharing the learnings with the rest of the students. A story (and picture of the winning team) are available on the web here.

What advice would you have for other schools thinking of putting something similar into place?

Be like NIKE and “Just Do It!.” That said, I was very deliberate in my approach. Micro-Tyco was baked into the curriculum—attaching grades gets work done. We also tempered the number of teams to make it manageable yet still effective. We had an incentive ($500 for the winning team) in addition to the grades. I think that leading by example and enrolling a faculty team is a great idea—if Micro-Tyco is good enough for the students, it is good enough for me.

Next steps?
We’re looking to possibly reach down into High Schools and possibly elementary schools to see if they will engage. We also might build this into our CSR course, and possibly look to direct some of the proceeds to micro-finance in our own back yard, to support entrepreneurship in the developing world and in our own community. We are also hoping that we might have the winning team visit a successful project in Mexico or Central America, though it is not sure yet.

What is The PRME Blog?

The PRME Blog is the online chronicle of UN PRME that publishes timely, engaging, cutting-edge, and provocative contents developed by the broad community of professionals involved in Responsible Management Education.

Click here to get to know The PRME Blog’s Editorial Board.